Serious trouble is brewing in the nation of South Africa the recent wave of xenophobic attacks, mainly against emigrants from other African countries, is causing serious concerns both in the country and around the entire continent.   The most recent sudden attacks on migrants by native South Africans has left most of the foreigners in the country living in great fear for their lives.

A number of African leaders have already issued statements condemning the happenings and urged the government of South Africa to take stern action against the perpetrators of the attacks.  Reports indicate that a number of culprits in the xenophobic attacks have already been arrested and are being taken to court to face various criminal charges.

While current South African President Cyril Ramaphosa has condemned the attacks and promised to take immediate action against the perpetrators, the recent events have seriously soured the country’s   relationships with both its neighbors and various other African nations. Many Africans from different  countries around the continent who live, do business or work in South Africa now see the  situation in the leading southern African nation as “terrifying.”

The violence first erupted around a week ago towards the end of August, when a South African taxi driver was allegedly shot dead by a suspected Nigerian drug dealer in the nation’s capital, Pretoria. The event caused scores of foreign-owned shops be looted and torched. The attacks against foreigners and their properties then spread to the main city of Johannesburg, the country’s economic hub.

By the middle of this week, Wednesday, September 4, reports indicated that more than foreign-owned 50 shops and a number of private vehicles had been destroyed.  A Somali store-owner in Johannesburg, 28-year old Mohammed Kadiye who’s lived in South Africa for nine years, was quoted as saying:   My fear is dying from being beaten. That is no way to die, especially at the hands of your fellow Africans. I ask myself what we have done to make them so angry.” 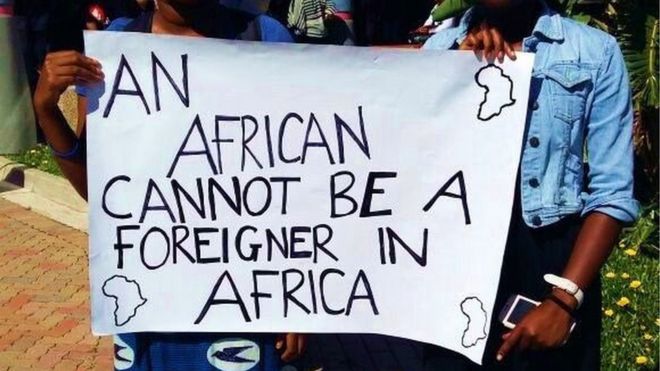 Previously indigenous South Africans were firmly supported by most other African nations in their fight against apartheid and white supremacy.  After many years and numerous events, they finally obtained their freedom in 1994 under the great anti-apartheid hero, the late Nelson Mandela.  It now appears that the attitudes of indigenous South Africans against immigrants from other parts of the continent have been changing for the worse.

Many of the dark-skinned South Africans now seem to have a feeling that the migrants from other parts of Africa are benefiting much more than them, from the country’s economy. There are hundreds of thousands of people from other African countries who have migrated to live, work or do business in the southern African giant nation due to its strong and more advanced economy, Much of  South Africa’s wealth has been generated from the extraction valuable minerals such as gold and diamonds as well as more advanced agricultural production.

Various industries and businesses also contribute significantly to South Africa’s economic advancement, making it one of the richest and most developed nations on the continent. While the whites are reported to still control the biggest portion of the economy,  for more than two decades, the political reins have now been firmly in the hands of the majority indigenous coloured people of various tribes.

A GLIMPSE OF HOPE IN SOUTH SUDAN

Preparations for the 5th edition of Beyond Zero Half Marathon